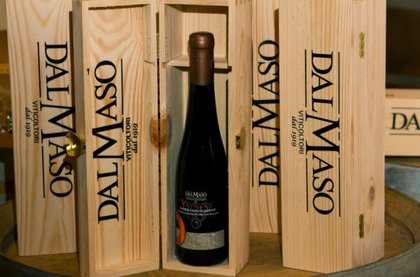 Time, tradition and passion are three ingredients that are a must in a great wine and they are all very present in Vin Santo Gambellara Classico DOC 2003 the farm Dal Maso Selva di Montebello presented for the first time in over 11 years of harvest.

For the occasion, we organized a wine tasting theme, with some of the best Vin Santo wines and sweet Italian wine.

Time is an immediately understandable to all, as I said this wine has rested for more than 10 years in small oak barrels called barriques, without any human intervention.
The tradition of Vin Santo Gambellara, and the passion of those who wanted to rediscover its authenticity, deserve to be explained in some detail. Only then can you understand what is really this wine for those who have decided to produce it - the company Dal Maso - the Doc Gambellara, and for the lucky few who will be able to enjoy it (they were produced just 150 liters to 400 bottles of 375cl ).

The idea of rediscovering the real Vin Santo Gambellara, which fully reflected the local tradition for its production dates back to the early 2000s, by a meeting of some manufacturers to this Doc and a bottle of Vin Santo, who had seen the light even before 1900, brought by Angie Maule. Compared to what is written in the product specification, this small group of passionate winemakers then decided to set rules even more restrictive in order to create a true expression of the wine tradition, as well as excellence. It should be noted that the project was followed, in terms of science and technology, University of Verona, in particular for the study and the section of native yeasts especially suitable for this wine project.

It must select the best bunches of grapes Garganega, preferably from old vines, up and over the age of 40. The clusters are intended for drying, hanging from the ceiling through the string, here called picai. The drying is common practice for the production of the other sweet wine typical of this doc, Recioto di Gambellara. In the case of vin santo, however, the drying period is prolonged, leading to an even greater concentration of the grapes.
According to tradition, hence the name, the grapes are pressed after the end of winter, during Holy Week. For crushing the choice was radical, retrieving an old press from time unused.
After the pressing, that using this technique "the past" takes several days, the wort is initiated at a very slow spontaneous fermentation, without addition of sulfur, for a period of about three years in wooden casks of a capacity not exceeding 100 liters. You could do the indigenous yeast, Zygosaccharomyces the gambellarensis, present only in Gambellara and isolated in the course of this experimental project in the Vin Santo. The wine is then continued always in wooden casks, sealed and filled.
Compared to the production of Recioto and other sweet wines similar, the big difference, refinement of Vin Santo lies in not filling the barrels, which leads to a natural oxidation permitted by transpiration through the wood, and the fact that the kegs are placed in locations, such vinsantaie, ventilated and subject to temperature changes between day and night and between summer and winter.

It must therefore act to slow the yeast, under these particular conditions of temperature, humidity and ventilation is the uniqueness of a wine unique, the extraordinary power and longevity. You can tell that this wine once bottled after such a long time, 10 years or more, is the most stable, and therefore the most long-lived, one can imagine.

To get an idea of how valuable and focused is this true "nectar", you think of a selection of 3000 kilos of grapes, which made it into must only 10% (630gr / l sugar content of the must) a further 50% was lost due to evaporation during aging, getting to the end of the 150 liters of Vin Santo 2013 vintage.

Vin Santo, subject to the rules of nature, rather than to those of humans, is not always the end in a sweet wine in alcohol content (12% alcohol in case vintage 2013), but it can, and it happened to other vintages, continue the fermentation to reach a degree higher than 16% alcohol, becoming a wine almost dry.

Nicola Dal Maso, owner of the sisters Anna and Silvia, a lover of sweet wines, the 2003 vintage, along with the 2007 (which is still resting in oak barrels) is the best, and that the Vin Santo Gambellara Classico DOC 2003 represents the best wine ever produced by the company. It has a scent of dark chocolate, figs and prunes, candied small black fruit with a white balsamic and slightly smoky. The taste is thick and rich, sweet and velvety. The high total acidity (13g / l) and the volatile component in mind can support a similar residual sugar (430gr / l) without getting cloying sensations and making enjoying a truly extraordinary body of the wine.

The price is demanding 140 euro a bottle in the cellar, but in view of what has been described so far, it should be clear that this is a precious wine, unrepeatable, now that evolves every year in a different way, for the few lucky (Having regard to the small number of bottles).

Would be many insights worthy of note, from the design to select a "mother" of Vin Santo on which to build a uniqueness transmittable.

Just as worthy of presentation would be tasting the other wines that had the merit of allowing us to enjoy, including the excellent Recioto di Gambellara the same company Dal Maso. The synthesis suggests that I love but do not distract attention from the star of the evening, The Vin Santo: From the farm in 2003, and to limit myself to list them below:

Two are the property business, for a total of about 30 hectares. One located in the town of Montebello, in the heart of the DOC Gambellara; the other Berici, including common Lonigo and Alonnah. First we will grow white grapes, mainly those in the second red berries.
All operations are carried out in the wine cellar of Selva di Montebello is our goal to maintain the integrity of the aromatic fruit. To this end, the harvest took place in boxes and grapes still intact is immediately sent to the pressing, made in a soft way with machines of the latest generation.
The annual production is about 500,000 bottles, of which 42% took last year the way of foreign markets. Traditional markets for wines Dal Maso are the United States, Canada, Germany, Denmark and the Scandinavian countries. New emerging markets as Eastern Europe and the Far East.