Tourism and landscape • Veneto
"Asiago Foliage", a feast for the eyes, with the autumn colors of the plateau 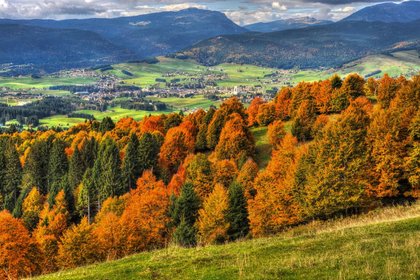 It's time for foliage: Asiago is dressed in autumn colors and scents, the mountains of the Plateau are transformed into one of the most fascinating places in Italy for those who love the time of year that in North America they call "Indian summer": starting from September the woods are saturated with colors, the air becomes more sparkling, the days get shorter and the sun's rays, more inclined, give orange tones to the landscape.

The "collective love" for the foliage of Asiago is so strong that every year it is celebrated with a party that lasts an entire weekend: Asiago Foliage.

Foliage to discover in the mountains of Asiago

A mosaic of colors unfolds visibly, ready to be "captured" by the photographer. There are many places, known and less known, that offer the opportunity to grasp autumn in all its chromatic splendor. In October, the beauty of Asiago's landscapes perhaps reaches its maximum peak, between the intense red of the maples and wild cherry trees, the suffused gold of the larch and beech trees, the ocher and orange that create a contrast with the green. of spruce trees.

Whether you prefer a short-range exploration - up to an hour's walk, if you go on foot - within everyone's reach, or you choose to go on hiking trails, you will not be disappointed, but on the contrary, you will will come across an exceptional view.

Asiago is located at the center of a network of paths that gently enter the vegetation, perfect for hikers, but also for riders, with mule tracks to be traveled slowly on horseback, and for bikers, who can also ride on electric bikes. to climb to higher altitudes and tackle steeper slopes.

Just 5 km from the center, in the locality of Meltar, is the Golf Club area, considered one of the most beautiful mountain courses in Europe. All around you can admire the autumn dress of maple, larch, lime and cherry trees.

Also in the vicinity of Asiago we find Cima Ekar. The Alta via Tilman stage is the technologically advanced home of an observation station equipped with the largest telescope in Italy. But even without looking at the stars it is worth admiring the wonderful surrounding beech forest, especially in the evening.

Also worth trying are the itineraries that are part of “Futourist”, the Interreg Italy-Austria cross-border cooperation program, all of great naturalistic, landscape, historical and cultural value. Paths that arise as a result of a reflection on gentle and slow mobility, which goes well with autumn.

For example, from Camporovere, in just over an hour, you can reach Forte Interrotto, a sentry who watches over Asiago, surrounded by a forest of magical colors. It starts from the center of Asiago to reach Cima Zebio, admiring along the way larch, beech, pine and spruce trees. Here is the open-air Museum of the Great War, which tells, through the "scars" of the front, such as trenches and tunnels, how soldiers lived in their daily lives.

More demanding is the "scale of the Alps", Calà del Sasso, a riot of colors and a true historical monument. Composed of 4,444 gray limestone steps between rocks and overhangs, it was the route used in ancient times by woodcutters to roll tree trunks up to the Brenta, and from there to Venice. In autumn, the color of the beech trees and the crackling of the leaves deposited on the path make this path a special sensory experience.

The mountain is also adventure, adrenaline, active exploration of the territory. Going away a few kilometers, equipped with boots and suitable clothing, you can discover simply unique itineraries, well marked by the CAI.

Perhaps the area that best expresses its color palette in autumn is Val Galmarara, where the yellow of the larch, associated with the mountain pine, creates a surprising combination. Climb up from piazzale Lozze, reach Baito Ortigara and arrive at an Austro-Hungarian trench dug into the rock, and then continue to the top of the mountain, at 2105 meters. Here you come across an Italian memorial stone and, a few minutes later, an Austrian one.

But in Asiago there is much more: a sport very suitable for the autumn season is climbing. Many take advantage of the so-called warm months to go on the wall, taking advantage of the richness of the cliffs of Asiago and the 7 Comuni Plateau.

Try the Covolo di Lusiana cliff, with overhanging pitches of great charm, suitable for all levels of difficulty. In Foza, between the towns of Ori and Biasia, there are routes facing south, mainly of medium-high difficulty, while in Camporovere there is Höll, an outdoor crag.