Attention: this is the card of a past edition. Search on the site or check with the references in the text if there is an edition scheduled for this year. 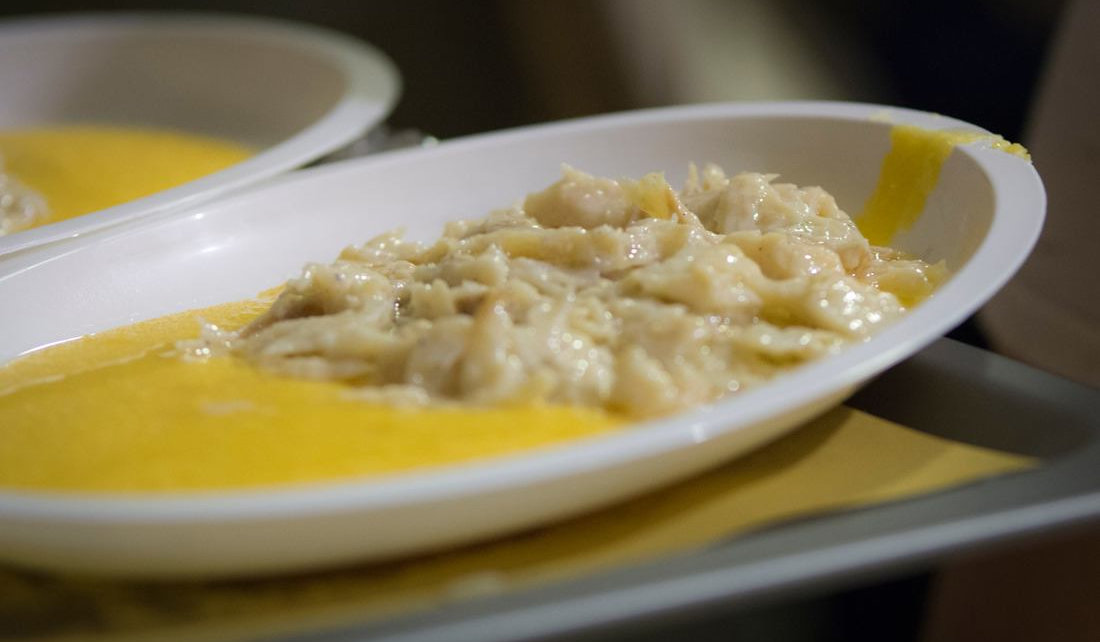 From Friday 18 to Monday, September 28, 2015 back in the streets of Sandrigo (VI) the Bacalà Festa alla Vicentina. Two weekends dedicated to the traditional dish, which will be prepared at least 80 quintals per 40,000 people expected. Many innovations of this edition: it begins with the election of Sandrina, the official sponsor of the festival, which will be named for the first time during the Grand Gala of Tuesday, September 15 Bacalà. Sunday 20, in cooperation with Ais Veneto, Villa Sesso Schiavo is scheduled the first edition of Bacchus and Codfish: a tasting event with more than 100 labels combined with Baccalà alla Vicentina. Completely renovated also the ceremony of investiture of new Knights of Bacalà on Sunday 27 September, when it will be performed for the first time the play The Lord of the Codfish Original text by Stefano Karadjov, from "Stay away from Venice" by Franco and Giuliano Giliberto Piovan. There is also the presence of the Norwegian Minister of Fisheries Elisabeth Aspaker. As happens every two years, the 2015 edition will be accompanied by Italo-Norwegian Days, the time during which a delegation from the island of Røst in the Lofoten islands, will pay a visit to the twins of Sandrigo. Fishermen and traders of dried cod, but also simple inhabitants of the island where the most prized fishing cod, will be to learn how to fish their seas become the flagship dish of an entire province. From Friday 18 to Sunday 20 and then from Thursday 24 to Monday 28 will be active the food stands where you can taste the classic Baccalà alla Vicentina with polenta or dishes Bacalà such as Bigoli Torcio of Limena with Bacalà, the dumplings Posina to Bacalà and risotto Bacalà. New this year tasting croutons with cod fish, fish and chips for the little ones and the availability of gluten free dishes. The Brotherhood of BacalàSi founded in 1987 in Sandrigo (Vicenza) on the lawyer Michele Benetazzo initiative to defend the good local cuisine. In these years the Brotherhood has called for the study and investigation to establish a codified recipe, involved experts to create the appropriate combinations about the wine or other typical products more suited to accompany the dish, has established relationships with other Italian confraternities and promoted the "days Italo-Norwegian" to Sandrigo.Il Baccalà alla Vicentina is recognized among the five foods of the Italian tradition in EuroFIR circuit, financed by the European Union in 2009. Note: a first course is always available without Bacalà and alternative the dish Bacalà Vicentina Contact: Pro Loco Sandrigo | Phone 0444 658148 | email [email protected]

From Friday 18 to Monday, September 28, 2015 back in the streets of Sandrigo (VI) the Bacalà Festa alla Vicentina.

Read from our Blog

On the occasion of the Carnival party, here are the typical desserts: from chiacchiere to frittelle, from castagnole to Pignolata. Let's celebrate the...

Sant'Antonio Abate is celebrated on January 17 and in Umbria it is done with a typical dish of the local tradition that wants to remember an episode that...

Other events at this time